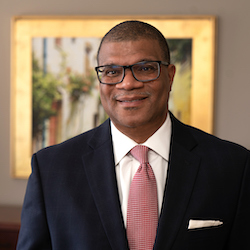 A graduate of the University of Tulsa College of Law, Danny is a partner with Conner & Winters in the firm's litigation group with extensive experience in commercial litigation, particularly in the area of condemnation law. He also has experience in personal injury and wrongful death cases.

He served as the United States Attorney for the Northern District of Oklahoma from August 2012 until March 2017. During his tenure, he led several large investigations, one of which resulted in the largest indictment in the history of the Northern District. Additionally, Danny initiated the Violent Crimes Task Force, a collaboration of local and national law enforcement agencies, resulting in the prosecution of persons charged with human trafficking of minor children.

Danny is a past recipient of the Oklahoma Bar Associations Ada Lois Sipuel Fisher Diversity Award in recognition of his efforts to promote diversity in Oklahoma. He has also been honored with the Omega Psi Phi Fraternity, Inc. community service award, CGM, Inc. Outstanding Citizen award, 100 Black Men of Tulsa, Inc. Hall of Honor Community Service Award, and Outstanding Achievement Award John F. Kennedy High School. He is very involved as a leader in the Tulsa community as a frequent speaker and member of multiple non-profit boards, including the Greenwood Cultural Center.