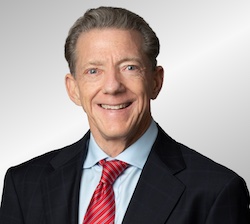 Eric graduated from Oklahoma State University in 1980 with a BS in Political Science and from the University of Oklahoma College of Law as #3 in his class as well as serving on the Oklahoma Law Review and Order of the Coif. Eric was a trial lawyer and Director at Fellers, Snider, Blankenship, Bailey and Tippens, Oklahoma City, from 1983 - 2010 during which time he tried over 70 cases to verdict or judgment and represented clients at between 400 - 500 mediations.

Eric was named General Counsel for Continental Resources, Inc. in 2010 and served in that role until joining Phillips Murrah as a director/shareholder in November 2021. Eric is a Fellow with the Litigation Counsel of America and has been listed for over 10 years in Best Lawyers in America.