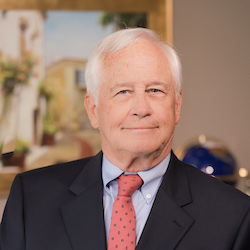 John McCormick graduated from the University of Notre Dame in 1966. He then served four years in the United States Marine Corps as a Naval Flight Officer. When released from active duty in 1971, McCormick entered the College of Law at the University of Oklahoma. Upon graduation from OU in 1974, he returned to the Marine Corps, serving two years as a judge advocate.

John returned to Tulsa in 1976 as a trial lawyer. In his forty-five years as a trial lawyer, he has tried cases both as insurance defense counsel and as plaintiff’s counsel. His practice has included automobile crashes, product liability, premises liability, employment law and medical/hospital negligence. He is a Fellow of the American College of Trial Lawyers.

In 1988, John was appointed as an adjunct settlement judge for the U.S. District Court for the Northern District of Oklahoma. He continued to serve as a senior adjunct settlement judge through 2009. He has conducted several hundred court appointed and private mediations since 1993. He continues his trial practice with Sherwood, McCormick & Robert, now primarily representing injured parties.