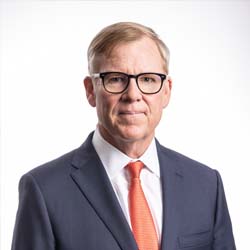 Ted Sherwood graduated from the University of Oklahoma College of Law in 1983. Ted’s law practice has been primarily in the area of medical and hospital negligence, construction litigation and general personal injury. Ted is the president and owner of Accord Mediation & Arbitration. Ted has mediated over 1,000 cases and was mediator of the year in 2015, 2016 and 2017. Ted is a Fellow of the American College of Trial Lawyers and the National Association of Distinguished Neutrals.

Ted has served on numerous non-profit boards including the Oklahoma Association for Justice, Areawide Agency on Aging, Tulsa Life Senior Services, and Clarehouse, an end of life social hospice.